The Mars Global Surveyor took this picture of Earth (image on left) from the orbit of Mars on May 8, 2003 at 8:00 am CDT. (The image on the right has a map superimposed on the left image to indicate the early morning sun over North and South America.) “This is the first image of Earth ever taken from another planet that actually shows our home as a planetary disk.” 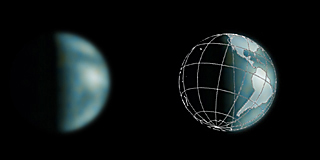 “The bright area at the top of the image of Earth is cloud cover over central and eastern North America. Below that, a darker area includes Central America and the Gulf of Mexico. The bright feature near the center-right of the crescent Earth consists of clouds over northern South America.”