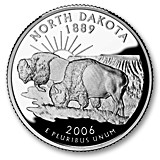 I received a new North Dakota state quarter yesterday mixed within some change. I still look at my change for state quarters. I am always pleasantly surprized to find the latest state.

The North Dakota quarter just might be my favorite design so far. It is a beautiful coin, especially in the silver frosted proof edition. I prefer animals, flowers, trees, and scenery over state outlines and other state symbols, and thus the 2006 group of five states has been the best set so far.

Oklahoma just held an online vote to select its design to submit to the mint for release in early 2008. The top two winners are:

It would have been nice if the Oklahoma quarter came out next year in 2007 so that it could coincide with our 100th year anniversary of statehood. Oh well. Either way, as the line from the song says, we have “plen’y of heart and plen’y of hope!”