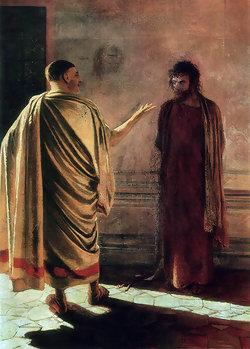 Julie had a copy of this painting at right in a post yesterday. It is called “Quod Est Veritas?” (What is truth?) by Nikolas Gay, 1890. Notice how the light is shining on Pilate and Jesus is in the shadows. My first thought was that it should be the other way around, but it’s not. How intriguing. But, as Fr. Stephanos pointed out, Pilate is looking at the light. Hmmmm…

From Pilate’s point of view, he is standing in the light. He understands the ways and truth of the world, and to him, Jesus does not. To Pilate, Jesus is the one in the dark. Pilate thinks he stands as the one in control, the one with the power.

Pilate’s upward palm is the center of the painting. It stands as a platform between the two men, between the world and heaven. The question, “What is truth?” is the pivotal, paradoxical, point. It is a moment of motion, movement, transition. At first, Pilate thinks he knows the answer and is offering it to Jesus. His fingers are spread out almost as if to fling the “truth” at Jesus. But in the pause, oh the golden silence of the pause, a kairos moment, a moment of doubt and uncertainty enters the picture. Pilate shifts from offering the truth to waiting to receive the truth. He begins to realize he does not know the truth. Truth personified in Jesus is standing right in front of him and he does not, cannot see it. Pilate is standing in the Light, not the light of the world but the Light of Truth.

Jesus stands in silence, not in defiance, but just there. Here is Truth if only Pilate and the world could see. Jesus is the one with the power and the control, but he does not have to wield it.

The moment shifts to Pilate’s feet. His posture is half-turned. He is caught between turning toward God and Truth, or toward the world. A moment of grace. Jesus freely gives Pilate the choice. Which way to turn?