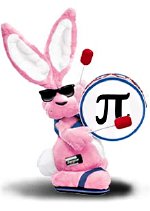 It’s March 14, and any student of mathematics should recognize today as Pi Day. Mathematicians do not get many days in the year to celebrate math, but here is one.