Remember this: without God and what God has done for us in Christ, nothing of who we are matters at all.

The saints talk about humility as the antidote to pride, or in other words, an acceptance of our complete dependence on God. Other saints speak in terms of submission, but this word grates on modern ears. This submission to God is not a loss of freedom; it is an acceptance of the reality of the situation, not the false illusion perpetrated by pride. Maybe this is further insight into when Scripture says to be aware, wake up.

“Sometimes you will never know the value of a moment until it becomes a memory.”

A right turn towards the lake
instead of the usual left that leads to home.
Down a short gravel road, park, a five-minute walk
through bare trees and dried leaves to the water’s edge.
Azure sky, blue water, red dirt.
The piercing golden sun hovers over the horizon.
Waves gently lap against the sandstone.
Winter cold seeps slowly inward.
Silence embraces. 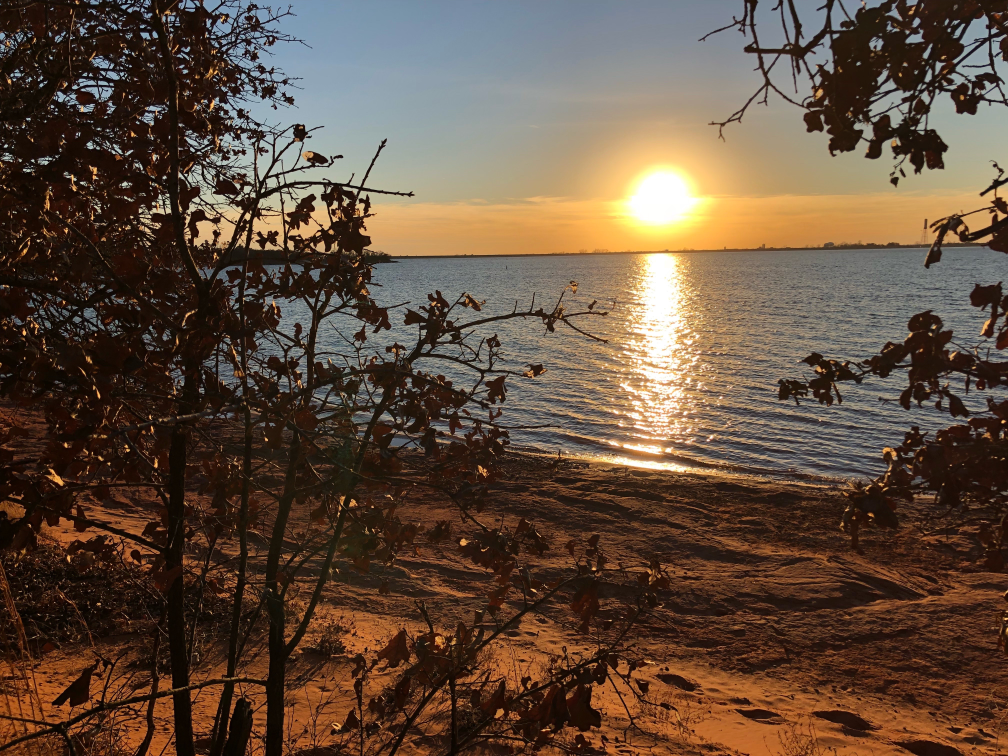 From Compassionate Blood: Catherine of Siena on the Passion, by Fr. Romanus Cessario:

So we turn to our sister Catherine, who was not a professional theologian, and discover what the wisdom of the saints tells us about Christ’s cry from the cross. In fact, Catherine provides a commentary that captures the general thinking of the Church about Christ’s cry of abandonment. It runs like this: Christ, writes Catherine, “was both happy and sad on the cross. He was sad as he carried the cross of his suffering body and the cross of his longing to make satisfaction for the sin of humankind. And he was happy because his divine nature joined with his human nature could not suffer and made his soul always happy by showing itself to him unveiled. This is why he was at once happy and sad, because his flesh bore the pain the Godhead could not suffer—nor even his [human] soul, so far as the superior part of his intellect was concerned.” It sounds like a complicated explanation, but Catherine intends it for simple, not sophisticated, souls—for people like us. Catherine appeals to the psychology of Christ; that is, she explains how his human soul works. Each of us has known an experience in which the superior part of our mind has brought comfort to the sadness that we experience in the lower soul. For example, when a loved one dies, we experience sorrow. When at the same time we ponder in faith the everlasting life that Christ promises to those who die attached to him, we experience a surcease of unrelenting sorrow. What Christ knows in his human soul comes from his being the Incarnate Son of God. What we know and it trumps even the most heartfelt sorrows comes from our faith in those things that Christ has revealed, such as life everlasting. Faith knowledge can affect what we experience as suffering. Like Christ, the Christian can experience joy and sorrow at the same time.

What Saint Catherine calls “the superior part” of the intellect, we know simply as our reasonable self. Each time we recognize that human reason can smooth emotional upset, we find ourselves operating from what Catherine calls the “superior part” of our souls. Classical psychotherapy proceeds on the assumption that arranging the categories of an individual’s personal understanding will relieve the various distresses and anxieties that afflict him or her. With sufficient time, skilled therapists can achieve some measure of success. On the cross, of course, Christ does not require counseling. Rather, the Incarnate Son continues to enjoy the full possession of the divine reason, even nay, especially after having mounted the wood of the cross. As Catherine reports God the Father speaking to her, “My beloved Son, your head, was the only one who could not grow in any sort of perfection, because he was one with me and I with him. His soul was beatified in his union with my divine nature.” How does this truth throw a light on Christ’s cry of forsakenness? And, what is more important, how does it help us?

In his Palm Sunday homily at the beginning of Holy Week in 2011, Pope Benedict XVI reminded the Christian people of the situation in which those who inhabit the world find themselves. “The Fathers of the Church,” he began, “maintained that human beings stand at the point of intersection between two gravitational fields. First, there is the force of gravity which pulls us down—towards selfishness, falsehood and evil; the gravity which diminishes us and distances us from the heights of God. On the other hand there is the gravitational force of God’s love: the fact that we are loved by God and respond in love attracts us upwards.” The challenge of course arrives at the moment when we find ourselves pulled down, abandoned, when everything within our human psychology seems to scream out Non serviam—I will not serve.

At this juncture in our Christian lives one—moreover that can recur multiple times during a single lifetime—who among us would find great comfort in a savior who, in effect, had announced himself abandoned to “the force of gravity that pulls us down”? Would we not rather prefer to embrace a Savior who, though tested in every way, yet remained without sin? Would we not find better comfort in the Savior described in the Letter to the Hebrews? Catherine surely thought this verse from Hebrews—“For we do not have a high priest who is unable to sympathize with our weaknesses, but one who has similarly been tested in every way, yet without sin” (Heb 4:15)—explains best what happened to her gentle Christ when he felt abandoned on the cross.

And Catherine acts on this word. She tells Raymond of Capua and the Dominican priests he governs: “Go to the school of the Word, the Lamb slain and abandoned on the cross, because it is there that the true teaching is found.”

A short little reflection on words by Romano Guardini, The Rosary of Our Lady:

The word is something very rich, alive, even mysterious: a formation of sounds and consonances by which the speaker gives the listener a glimpse into the inner realm of thought. To a certain degree this might be done by a simple exclamation — an outcry of fright, joy, or affection — although this could not be called a real word. A word comes into existence if the sound expresses not only an emotion or a situation but also an association, a perception, and a reality.

While I speak, the word floats in space, as it were, and what was formerly closed within me is now open. Those who hear the word can grasp its meaning. Then it fades away, and its meaning is inside again, in my own self and in those who understood it.

But with all this something has changed: the meaning became a word and it remains a word. Before it was only the gist of being and life, the inner word that man speaks to himself because he cannot live a spiritual life without living in words. Now it has been spoken, pronounced, and stands open for all time. After speech has died away, its place is no longer in outward audibility, but in the memory of those who heard it. But this memory is a real place in which the word can be found again and examined, and from which it can at all times step into open speech again.

Something else has happened, too: so long as I keep silence, I carry the meaning within myself and am master over it. Even if the other person guesses the meaning, I still have not spoken. But when I speak, I transfer it from my own reserve into the domain of the other. I risk taking it out into the open and thus into danger. Now I cannot extinguish it any more, because what has been said has been said. So speech is the beginning of history — the beginning of that which happens, with all the consequences.

It is said sometimes that the word is spiritual, but that is not true; the word is like man. It has a body like a mortal: the form of notes and sounds. It has spirit, again like man: sense that becomes manifest in the audible. And it has, like man, a heart: the vibration of the soul which fills it. The word is man himself, in his finest and most agile form. That is why the word has such power.

And this is so not only because of the word’s outward vibration; if it were only that, the roar of the sea or the sound of a siren would be more mighty. Neither is this because of its emotion, because one might try to detach the emotion from the word — in fact, the manner in which modern man reads today points in that direction. Again, this is so not only because of emotion; in many cases, a mere gesture or a cry expresses much more. No, the power of the word is explained by the fact that it exists like any mortal, and therefore penetrates into the very essence of life. Who has not come to know the sustaining and comforting effect of a “good word”: how its truth engages the mind; how its beauty gladdens the senses; how its sweetness can actually be tasted? But who does not also know how an evil word sinks like a thorn deep into one’s soul, so deep that even after years it seems to smart? The word is more than mere communication; it is power, substance, and form.

This is not only true when the word has just been spoken; it is true also when it continues to vibrate in our memory. The word is not only the self-expression of the person who speaks, but also the assumption that this person can speak at all: it is speech. In the course of time, words and their arrangement have expanded and developed into a world of sense-configurations within which the individual has his roots.

The language a man speaks is the world in which he lives and strives; it belongs to him more essentially than the land and the things he calls his home. This world of speech consists not only of the words that put it together, but also contains sentences filled with meaning: proverbs, for example, thoughts of wise and noble men, songs, or poems. They can confront the individual at any time and exercise their power.